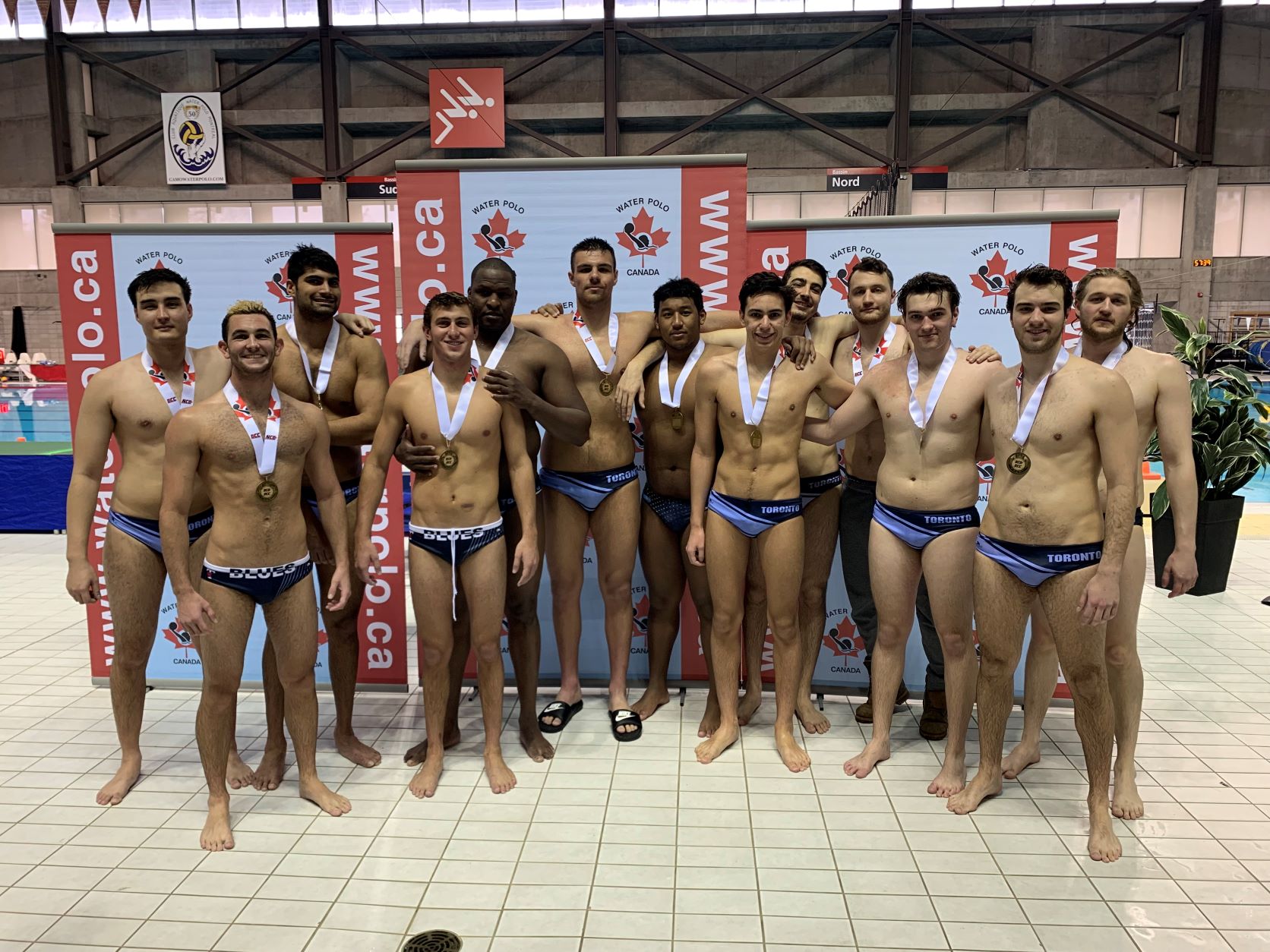 The Toronto Golden Jets senior men recorded three wins and a tie in Montreal to win the gold medal at the second MLWP league weekend.
On the first night, right after driving for six hours, the team hopped out of their cars and into the pool to face off against Ottawa 3. Showing no sluggishness from the drive, the Jets jumped out to a 5-1 first quarter lead. Toronto followed that with a 7-2 second quarter to lead 12-3 at the half. From then on it was a pair of 5-2 quarters leading to a Jets 22-7 victory. Aiden Masters led the scorers with four goals. Sukhmun Hare, Bruno Marunica and Patrick Conn notched hat tricks. Tuna Tali, Timmy Pourkazemi and Euan Scoffield popped in a pair apiece while Tony Giannatsis, Cameron Hexter and James Glaser added singles.
The second day began very early for the Jets with a 8:30am game against one of the hosts, CAMO 2. Again the Jets jumped out to a 5-1 opening quarter lead. However, CAMO bounced back to tie the second period 2-2 leaving the Jets ahead 7-3 at the half. The Jets began to pull away with a 4-1 third quarter and really blew the game wide open with a 7-1 final period leading to a 18-5 win. Giannatsis, Hare and Rudy Despaigne each scored a hat trick to pace the Jets’ attack. Scoffield, Conn and Glaser all potted a pair of goals while Tali, Marunica and Richard Laurie rounded out the scoring with single markers.
In the afternoon, the Jets were up against another Montreal-based team, DDO. The game was a rematch of the last national championship final where DDO squeaked by the Jets. The two teams went back and forth evenly until the middle of the third quarter when the Jets grabbed a 8-6 lead heading into the final frame. However, DDO surged back with four straight goals to establish its own two goal advantage at 10-8. With less than two minutes remaining, the Jets pulled to within one and then tied the game up in the final minute.
On the final day, the Jets entered the gold medal game to face the other host team, CAMO 1. The game was hard fought throughout with CAMO grabbing an early lead only to see the Jets move out in front as the second half began. Jets goaltender Emirhan Ozdemir had an outstanding game stopping two breakaways and a penalty shot to keep the Jets close when it looked like the home side might pull away.
With the back-to-back gold medal weekends and an undefeated regular season, the Golden Jets will enter the national championships as the #1 seed out of the Eastern Conference. The finals will take place at the end of April at Markham’s Pan Am pool.