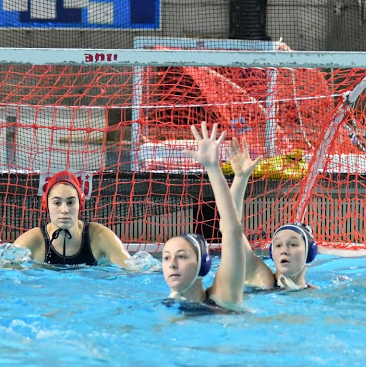 The Golden Jets senior women’s team began the 2019 MLWP season with four games in Montreal and came away with two wins, a tie and a one-goal loss.
On Friday night, the team jumped into the pool to face Montreal team DDO after a 6+ hour drive.
Both teams started tentatively trading single goals in the opening quarter. The Jets pulled ahead by two in the second quarter and kept that lead at the end of the third to lead 5-3. However, fatigue became a factor and DDO tied things up quickly to start the final frame and made it three unanswered goals to forge ahead 6-5. The Jets fought back to tie things up but conceded a late goal to fall 7-6.
Allie Vas led the way with a hat trick while Rhianna Wood, Deena Charles and Sara Sutherland added singles.
The next day began with a game against last year’s national champions and host CAMO. The Jets again played their opponent to a 1-1 first quarter draw. And, as the night before, rode a 3-1 second quarter to a 4-2 halftime lead. CAMO got one back to trail 5-4 after three periods and scored the only goal of the final quarter to leave the teams tied 5-5. Caitlyn Tiedje paced the Jets with a pair of goals from the center with Charles, Sutherland and Vas notching single tallies.
A few hours later, the Jets women were back in the pool to play Capital Wave (Ottawa) and fell behind early before tieing things up 2-2 by the end of the first quarter. The Jets scored the only goals of the second quarter and the third quarter to surge ahead 4-2. This time, the team kept the pressure on and won 7-4 for its first victory of the season.
Charles had a monster game scoring 5 goals to lead all players while Emily Grossman and Tiedje added singles.
Early Sunday morning would be the setting for the team’s final game of the weekend. A new entry, St. Lambert was the opponent. The St. Lambert team is comprised of numerous older players who spent their careers playing for CAMO and DDO. As such, it was conventional wisdom that they would triumph easily. But the Jets women had other ideas. St. Lambert jumped ahead 2-0 and 3-1 in the first quarter and it appeared that the more experienced Montreal team would run away with things. But the Jets wouldn’t go away and scored twice near the end of the first quarter to tie the game 3-3. St. Lambert opened the scoring in the second quarter and then the teams traded goals leaving the Jets down 6-5 at the half. Then the unthinkable happened as the Jets scored two unanswered goals to go ahead 7-6. St. Lambert tied it 7-7 with a minute to go in the period but the Jets responded just 15 seconds later to carry a 8-7 lead into the final quarter. St. Lambert pulled even with 4:30 to go but again the Jets responded on the next attack to retake the lead. The exciting game went down to the horn but neither team could generate a goal leaving the Jets with a surprising 9-8 victory. Vas led the Jets attack with her second hat trick of the weekend. Wood scored a pair while Charles, Grossman, Sutherland and Tiedje added singles.
With three starters unable to make the trip and three more top players out for the season, the undermanned Jets women displayed great determination and belief in each other to pull off a very successful weekend!