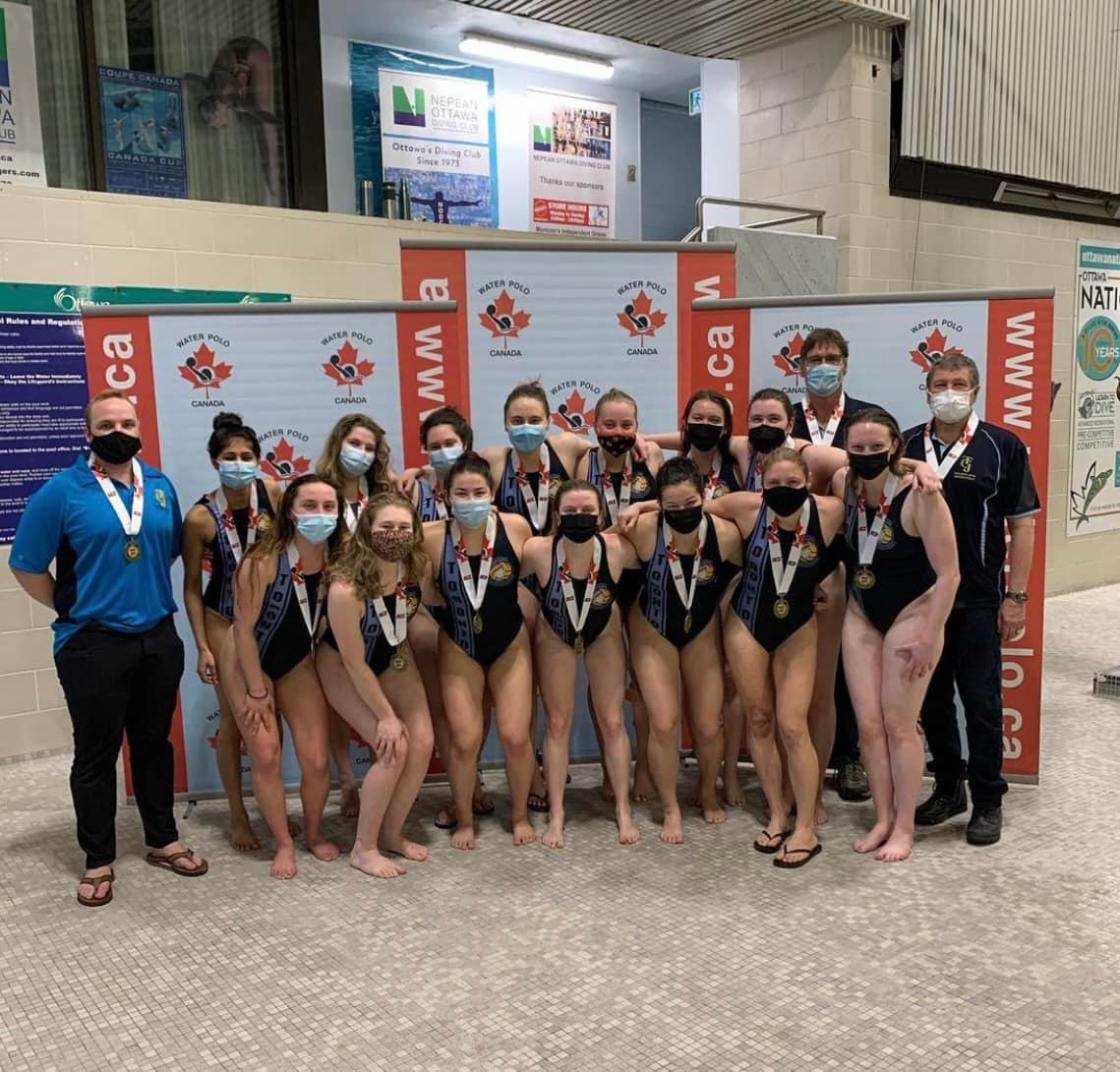 The Toronto Golden Jets women traveled to Ottawa for the first Major League weekend tournament and went 3-0 to win the gold medal.
On Saturday, after traveling for five hours, the team got out of their cars and promptly got into the pool to take on the perennial powerhouse CAMO (Montreal). The Jets stunned CAMO jumping out to a 4-1 first quarter lead. CAMO won the second quarter 2-1 but the Golden Jets led 5-3 at the half. The Jets regained control of the game in the third quarter winning the frame 3-1 to take a 8-4 lead into the final quarter. The teams traded goals three times leaving the Jets with a surprising 11-7 victory. Deena Charles, Hannah Levin and Julianna Hill each netted a pair of goals while Lauren Dundee, Vega Jones, Evie Bland, Sarah Young and Christi Bardecki added singles.
It was a quick turnaround for the Jets who found themselves back in the pool a few hours later to take on the hometown Capital Wave squad. The teams each won 2-1 in the first two quarters to end up tied 3-3 at the half. The Jets surged ahead 5-3 by the end of the third before fatigue set in and the team ended up hanging on to eke out a 7-6 victory. Bardecki, at least two decades older than her teammates, led the way with a hat trick. Levin notched another pair while Dundee and Hill scored once each.
On Sunday morning, the undefeated Jets were up against the undefeated team from St. Lambert. Based on the previous day’s results, things didn’t look promising entering the game. While the Jets had managed to squeak by Capital Wave, St. Lambert had demolished Capital Wave 20-3. However, the Jets players came out firing on all cylinders and grabbed a stunning 2-0 first quarter lead. St. Lambert punched back in the second to take a 3-2 lead at the half. The Jets fought back to win the third quarter and knot things up 4-4 heading into the final quarter. The Jets then found another gear and shut out their opponents 3-0 to win 7-4 in what was the gold medal game. Bardecki again paced the attack with a pair of goals and got singles support from Levin, Dundee, Bland, Young and Chloe MacVicar.
The Jets now head to Montreal on the weekend of March 12-13 to play the final regular season weekend of games.