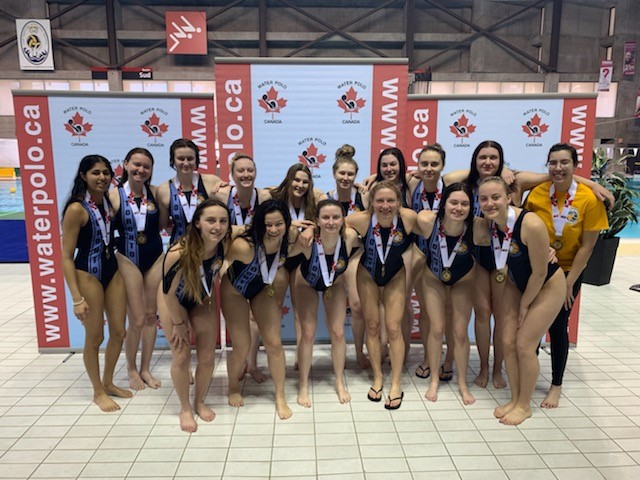 The Toronto Golden Jets senior women traveled to Montreal for the final MLWP league weekend and used two wins and a tie to finish the regular season undefeated and win their second gold medal in a row.
It was an early rise and six hour drive for the team before jumping into the water to play Capital Wave. The Jets started quickly gaining a 4-2 first quarter lead. Then, the team exploded for five unanswered goals in the second period to go up 9-2 at the half. Another strong quarter (5-1) pushed the lead to 14-3 heading into the final frame and an eventual 16-6 victory. Twelve different Jets hit the scoresheet. Lauren Dundee led all scorers with a hat trick. Christi Bardecki and Serena Spencer both scored twice while Caitlyn Tiedje, Deena Charles, Vega Jones, Sarah August, Kaitlyn Palmer, Alexandra Lee, Chloe MacVicar, Julia Decaire and Evie Bland added singles.
A few hours later it was back in the pool to face the second place squad from St. Lambert (Montreal). Again the Jets leapt out to an early advantage ending the opening quarter ahead 3-1. The teams then traded 2-1 quarters with the Jets winning the second and St. Lambert the third. The Jets used a clean 2-0 final period to register a 8-4 win. Decaire paced the attack with a pair of goals. Bardecki, August, Dundee, Spencer, Bland and Jones each found the back of the net once.
Early the next morning the Jets squared off against the host CAMO club. The teams traded single markers in a tightly played opening quarter. The Jets then eked out consecutive one goal victories in the next two periods (2-1, 3-2). However, with fatigue setting in on the Jets players, CAMO roared back with three goals in the 4th quarter before the Jets salvaged a tie with a goal in the final few seconds of the game. Bardecki led the way with two goals. Bland, Dundee, Jones, Palmer and Julianna Hill notched single tallies.
It is the first time in the team’s history that a National League weekend tournament was won. The back-to-back gold medals meant the Jets will enter the National Championships as the #1 seed out of the Eastern Conference. The Finals will take place on the final weekend of April at Markham’s Pan Am pool.