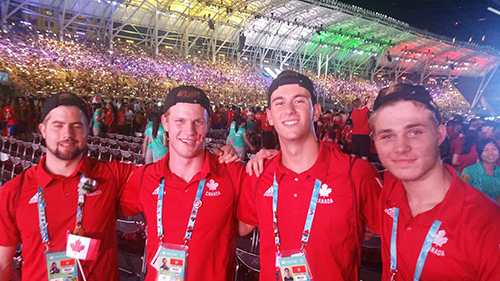 The World University Games (FISU) got underway this weekend in Taipei, Taiwan. FISU is the second largest international sporting event behind he Olympic Games.
The Toronto Golden Jets placed five members on the team, four players and one staff.

Pictured from left to right are Mike Chapman, Paul Spooner, Andrei Velasevic and David Rapoport. The picture was taken at the Opening Ceremonies for the Games. Tomorrow the team faces off against South Africa and on Monday will play Serbia to complete the preliminary round robin phase (yesterday the wam fell to Hungary in its opening match).

Chapman and Spooner just graduated from the University of Toronto and were members of this year’s National Champions Jets senior men’s team. Velasevic (UofT) and Rapoport (George Brown College) are set to enter university next month and were members of the Jets U19 team that made it to the Final Four at the National Championships as well as playing on the Jets second senior men’s team.

Club Head Coach and Founder George Gross, Jr. (who took the picture) is the General Manager of the team and also received the Outstanding Coach Award at this year’s senior national championships.

Congratulations to Mike, Paul, Andrei and David for making the team!

After some great, persistent and creative work on the parts of Sanja S., Pam B. and Tanya F., the new, updated Toronto Golden Jets web site is fully functional!!

The exact web address is: www.torontogoldenjets.ca

All of our previous web addresses will still seamlessly redirect everyone to this new site address.

As we get the day-to-day data input flowing smoothly, we will be looking for ideas on items of interest to add to the site.

Thanks again to Sanja, Pam and Tanya for their commitment to the club!

The Golden Jets U19 boys lost 12-10 to the Calgary Torpedoes in the bronze medal match at the recently concluded Canadian National Championships. David Rapoport led the way with five goals, Stefan Mitic added a hat trick and Luka Pejanovic notched the other tally.

The Jets U19 team was in its second straight Final Four National Championship and had an improved performance against Calgary which dominated the Jets last year.

Rapoport, Mitic and goalie Andrei Velasevic have a busy summer ahead as they will be representing Canada at the World Student Games in Taipei, Taiwan in August (more info to follow).

Congratulations to coach Predrag and the entire team!

The Golden Jets U19 boys are in Calgary for the Canadian National Championships Final Four the result of a surprising move from 6th place to 2nd place at the Eastern Conference playoffs.

This is the second year in a row the U19s qualified for the Final Four. Congratulations to Predrag and all the players!

The Golden Jets U14 boys under the direction of Mohamed Rezk finished 5th at the recently concluded Ontario Provincial Championships.

The Jets started out nervously losing a close match to Hamilton 9-8. The heartbreak showed in the next match which saw the Jets fall 16-11. But the team picked up on the experiences and came back to win its final two games against Capital Wave of Ottawa (11-5) and Kitchener-Waterloo (11-9).

The team was made up almost exclusively of players with a year or less of water polo experience.

Congratulations to all the players and Moh for a job well done!

The fledgling Golden Jets girls age group program went to its first full tournament this year in |Hamilton and came away with 2 wins and 2 losses despite not having a goalie.

This is a good start to build a competitive team for next season.

The Golden Jets women played valiantly at the National Championships and came away with a 4th place finish.

In the semi-finals, the Jets surprised eventual national champion Team Saskatchewan by jumping out to an early 3-1 first quarter lead. But Team Sask came back with four unanswered goals in the second quarter to gain a lead they would never relinquish, eventually prevailing 7-5. Shae Fournier and Nicole Brown each scored twice and Ana Miroslavic added a single.

In the bronze medal game, the Jets faced off against last year’s national champions CAMO (Montreal) and never got untracked though the Jets did score the most goals they had all season against CAMO in losing 13-8. Fournier led the way with a hat trick while single tallies came from
Rhianna Wood, Tanya Robinson, Julie Szpara, Brittany Sinclair and Miroslavic.

Starting goalie Rachael Jaffe had a strong game against Team Sask and a strong first half against CAMO before giving way to fellow keeper Daniela Freeman.

The Toronto Golden Jets senior men won the National Championship title with a 4-3 win over the Mavs. It is the third championship in the last four seasons to go along with last year’s silver medal finish.

The Jets fell behind 2-0 in the first quarter and 3-1 at the half as the offence couldn’t get untracked. The Jets then scored the only goal of the third quarter on a Tuna Tali penalty shot to trail by one entering the final frame. The teams traded chances throughout the first half of the fourth quarter until Euan Scoffield tied it up on a power play with two and a half minutes to go. Then Milos Radojcic powered a long distance shot in with 44 seconds remaining to lift the Jets to the gold medal.

Scoffield scored twice to add to the singles by Tali and Radojcic.

Scoffield was named the tournament MVP. Goalie Emirhan Ozdemir was named the league’s best goaltender and coach George Gross, Jr. was named the recipient of the William Shaw Award as best coach.

In the semi-final a day earlier, the Jets fell behind B.C. Storm 3-0 but out scored their opponents 10-2 the rest of the way including five unanswered goals to start the fourth quarter to win 10-5.

The quarterfinal match saw the Jets give up the first and only goal they would enroute to a 12-1 win over Hammer WPC (Hamilton).

CONGRATULATIONS TO THE MEN FOR A GREAT JOB!!!

The Toronto Golden Jets entered a second team in the U14 March Madness tournament in Etobicoke. The team was composed entirely of 11 and 12 year olds, the players that next year will form the core of the Jets U14 league team.

The experience that the players gained from these games will be invaluable to their development and to their performance in U14 league play next year.

The Toronto Golden Jets boys U14 team comprised of 13 year olds had a tremendous weekend at the March Madness tournament in Etobicoke. The team won the bronze medal out of the 16 teams.

The Jets won both of their round robin games to start the tournament defeating Ottawa 15-5 and Mavs Red 9-5. This was followed by two losses to the eventual gold and silver medal winning teams which set the stage for the bronze medal game against Montreal Machine.

The Jets trailed 4-1 entering the final quarter of play but roared back to tie the game 5-5 and win the bronze medal on goal differential.